Blazing the Hippie Trail in 1959

Calcutta to London on £10 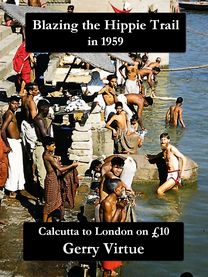 Christmas 1959, Calcutta. Gerry is stranded in the Salvation Army Hostel. He meets Geoff, an eccentric loner. Only a few pounds between them. How to get to Europe overland? No money for a plane; no internet; no social media; no guide books; no useful maps; no ATMs; no clear options. Across  Asia to Europe by land. But  how? There must be roads, sure to be, but which is the right one? Can you hitch-hike? What about buses and trains? Nobody seems to know. There are no hippies, no Hippie Trail. Nobody will even hear about hippies for another five or six years.  It’s all a bit chancy, really. But they give it a go.

Mixing it with oddballs, con-men, splendidly decorated generals, a family of wrestlers, and eccentrics of all stripes, they freeze in the Himalayas, upset the military-industrialists in Darjeeling, bathe their sins away in the Ganges, get arrested in Afghanistan, dodge the Shah’s SAVAK in Teheran, rid themselves of lice in Istanbul, have a splendid party in Macedonia, and fetch up finally in 1960s London in a base across the road from the Sun in Splendour pub in Portobello Road.

All on ten pounds.